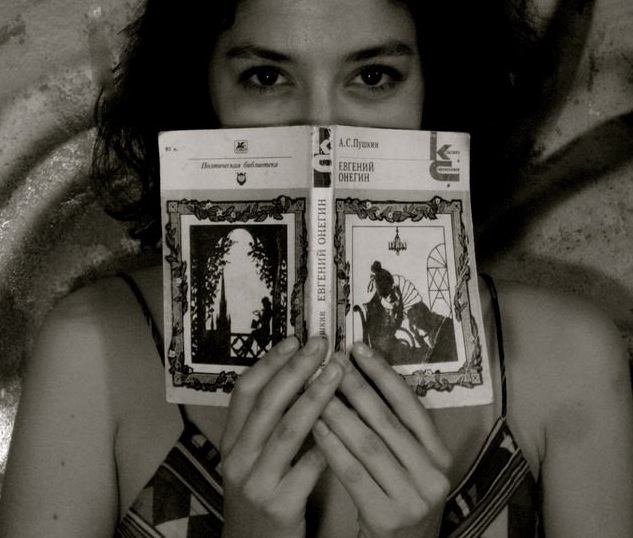 DAY ONE
I go to Serbo-Croatian class, where we learn how to say “he gave her three piglets as a gift,” and “in Dalmatia there are many stones.” I look forward to the day when I will use these sentences in a conversation.
I go home to read Turgenev, but watch the news all day instead. My friends and I are proud to be among the only Americans to know the whereabouts of both Chechnya and Kyrgyzstan, and the very real difference between Chechnya and the Czech Republic.

that not all the world’s monsters
are ours
—Vsevolod Nekrasov, “I Live I See,” translated by Ainsley Morse and Bela Shayevich

On Saturday, I attend a panel titled “The Russian Avant-Garde Goes Underground.” On Monday, I attend a reading of the work of three Russian poets. (I reject linear time and treat these two events as one.)
Saturday’s discussion is focused on Oberiu, the “Association for Real Art” founded by Daniil Kharms and Alexander Vvedensky in Leningrad in 1928. Oberiu dissolved in 1930, after one of its signature poetry reading/magic shows attracted the attention of the authorities. It was the last Soviet avant-garde to live in the open.
Eugene Ostashevsky, who translated the first English-language collection of Vvedensky’s poetry, quotes Nietzsche: “I am afraid we cannot get rid of God because we still believe in grammar.”
Oberiu rejected the use of language to create artificial boundaries, to make what is different similar, to make time a line. In 1933, Vvedensky reflected on his work:
I raised my hand against concepts, against initial generalizations … I became convinced of the falsity of old connections, but I don’t know what the new ones should be like … my basic impression is that of the disconnectedness of the world and of the dismemberment of time. Since these contradict reason, that means that reason does not understand the world.
Ostashevsky says that for Oberiu, “active non-understanding of reality” was the purpose of art, the means by which art helped you to live. Polina Barskova, who writes wonderful meta-literary poems, speaks about Yakov Druskin, the only member of Oberiu to survive the winter of 1941–42, the siege of Leningrad. At a time when people were eating their boots, and sometimes even their neighbors’ children, Druskin’s diary makes no mention of the siege, of the landscape, of the war. Druskin preserved the manuscripts of both Kharms, who died in a prison asylum after asking for a hat to conceal his thoughts, and Vvedensky, who died on a train, having been deported after missing another, earlier train of literary evacuees.
The rejection of concepts, causality, and sequence can lead to practical difficulties. One audience member asks, “What is the consequence of dropping consequences?”
Ostashevsky answers, “I can’t answer that, because without sequences I can’t formulate an answer, and you can’t understand what I say.”
“That is a problem,” the audience member agrees, and returns to his seat.
Matvei Yankelevich, who has translated both Kharms and Vvedensky, remarks that Oberiu’s work is “both tragic and inexhaustibly hilarious.” During a reading of Vvedensky’s short verse plays, the audience giggles at lines like “Impotent-shimpotent. Who cares. That’s not why I died, to have to do everything all over again.” But the tragic, too, is ever-present: “The ruling night was just beginning, / we cried a century.”
Ainsley Morse, who cotranslated, with Bela Shayevich, I Live I See, a lovely little brick of poems by the Moscow minimalist Vsevolod Nekrasov, speaks about Nekrasov’s rejection of “literocentrism” and his embrace of “living speech,” a personal relationship to a historical moment. In a sense, his position was the opposite of Oberiu’s: he believed that “the more you resemble others, the more you resemble yourself.”
Morse’s and Shayevich’s incantatory, musical readings bring out the humor in Nekrasov’s poems. The packed room laughs at lines such as “head / in the water // head / in the sky // foot in shit,” (a pithy summary of the plight of many writers) or “the cause of death / was living // the immediate cause / of death was // living in Moscow.”
Nekrasov’s use of repetition and his elimination of context both reduce and multiply the meanings of individual words, stripping away traditional signification and giving words new life in sound. Morse and Shayevich read Nekrasov’s parody of Alexander Blok’s classic poem “Night, a streetlight, a canal, a pharmacy”:

Their rhythmic performance makes the poem sound almost like a sample, a loop. Keith Gessen and Kirill Medvedev create a similar effect in what Gessen introduces as their “first number,” a performance of Nekrasov’s poem about Boris Groys, one of his numerous nemeses. (Groys, who teaches at NYU, is author of The Total Art of Stalinism, a book that has blown my mind on several occasions.) I keep waiting for Gessen to start beatboxing as Medvedev drums on the lectern, chanting,

don’t oh boy Beuys
but if you gotta fret
forget Beuys, get

fed up with gross Groys

Peter Scotto, who co-edited and co-translated I am a Phenomenon Quite Out of the Ordinary : The Notebooks, Diaries, and Letters of Daniil Kharms, observes that “translating a poem is like bringing a plane in for a crash landing—the question is how much damage will be done, and whether there will be any survivors.” Reading bad translations is like strolling through a morgue. But these new, distinctly American renderings of Kharms, Vvedensky, Nekrasov, and Medvedev are full of life, well-populated. It’s brave, even foolhardy, to try to translate poets who undermined the very foundations of language. So when it turns out well, it’s like Sully Sullenberger landing on the Hudson.

Socialism or death. Why pick when you can have both.
—Nekrasov, “I Live I See,” translated by Ainsley Morse and Bela Shayevich

I go to Brooklyn for a reading and concert by Kirill Medvedev, a socialist underground poet from Moscow. By now you’ve probably heard of him: n+1 and Ugly Duckling Presse recently released a book of his poems and essays.
Medvedev sits at BookCourt, flanked by “Cooking,” “Travel,” and “Psychology and Self-Help,” and sings his socialist protest songs, accompanying himself on the guitar. He performs a Russian version of “Which Side Are You On?” and two songs set to lyrics by Alexander Brener, a Russian performance artist and activist most famous for spraying a green dollar sign on Malevich’s painting of a white cross. Many audience members look sympathetic but bewildered; it is possible that they were attracted to the event more by n+1 than by any special passion for Russian socialist folk-rock.
The evening ends with lyrics by Brener, with an amusing translation read by Gessen:

Novelists snort coke and guggle down whiskey
While in Afghanistan refugees tremble with dried-out kidneys.

Musicians have grown fond of their magnificent poses
While in Russia people choke on vodka and tuberculosis.

Who are you working for, artists and writers?

Who are you working for, poets and musicians?
Someone answers: For applications... for teaching positions!

For the last few months, my friends and I have been pondering the Medvedev phenomenon. His book has been reviewed in The New York Times, Bookforum, The Observer, and other publications in which one is unaccustomed to seeing underground socialist poet-activists. This is in part thanks to the good connections of Medvedev’s translators. But Medvedev’s work also seems to have struck a chord with a group of Americans for whom an unapologetically leftist writer has an undeniable charm. (Merriam-Webster announced last winter that “socialism” “and capitalism” had tied for top word of 2012, trailed by “malarkey” and “schadenfreude.”) I met Medvedev in Moscow in December, for an article I was writing on Russian literature and politics. When he casually mentioned “class warfare,” in reference not to the right-wing fantasy of bloodthirsty welfare queens, but to the systematic exploitation of the poor by the rich, I felt a little tingle down my spine.
We go to the afterparty, a room full of attractive young people who want to talk about Russian literature. I die of happiness.

The only thing that interests me is “nonsense”: only that which has no practical meaning. Life interests me only in its absurd manifestations. Heroism, pathos, daring, ethics, hygiene, morality, tenderness and fervor are odious to me as words and feelings.
—Kharms, I am a Phenomenon Quite Out of the Ordinary : The Notebooks, Diaries, and Letters of Daniil Kharms

From above with a crash
you fell into the bath.

Too brief
is the life
of the poet.
—Kharms, I am a Phenomenon Quite Out of the Ordinary : The Notebooks, Diaries, and Letters of Daniil Kharms

I attend a seminar taught by Mikhail Shishkin, who is rumored to be Russia’s greatest living novelist. I signed up because I was curious about how a writer could teach himself. When Harvard was considering hiring Nabokov, Roman Jakobson quipped, “Even if one allows that he is an important writer, are we next to invite an elephant to be professor of zoology?” Harvard didn’t hire old Volodya. (You can assess Nabokov’s teaching skills based on his own account.)
Unlike the average elephant, Shishkin subscribes to old-fashioned and distinctly Russian ideas about the writer as prophet and martyr. The great writer sacrifices his health to impart a sense of immortality to others. He lives a lonely life in order to facilitate the mingling of souls. He has a divine mission, and will not rest until he has achieved it. Or died in agony. Whichever comes first.

“Did my novel make you feel a little bit immortal?” Shishkin asks us, looking around the room hopefully. We avoid eye contact.
Eventually someone asks, “Why write many books when you could write just one?”